Her first abandoned building was the Skedee High School in Oklahoma, “I was shocked with the amount of stuff left in the building even though it had been abandoned for over 50 years.” When she used to drive by abandoned buildings it never crossed her mind about the things left inside, in fact, there wasn’t even much thought about the buildings themselves. “After seeing paper and books that had past students names written on them I was on a mission to find out more. Why and when did it close? Could I find anyone who used to go there? Were there any plans for the school?” That jump-started the hobby for her and instead of just going to cool places it became a sort of a historical conquest.

Emily was brought into the Abandoned Atlas Team in December of 2019. “I’m not gonna lie I fangirled a bit. My first published post I was ecstatic, I felt like I finally had the right audience for my work. The opportunities that came with it made me love the website even more. I remember my first interview with a couple at Waukomis Christian Church. They had bought and restored the 1897 church and insisted on keeping the original sanctuary despite being advised on moving it. We talked with them for at least a good 40 minutes about the church, the abandoned Waukomis Middle School beside it, and the town’s other disappearing buildings. They even rang the bell for us that has sat in the bell-tower for the last 120 something years ago. We could tell they were just as passionate about preserving Oklahoma’s dwindling history as we were. When interviewing people and hearing the first-hand stories and recollections of a place and seeing how a person connects to a building, it forms a connection between not only you and that person but yourself and that building.”

Having started up Abandoned Kansas she felt the need to help further expand the Abandoned Atlas Foundation and bring Missouri into the mix. “I wanted to expand my knowledge of my our states and help educate others on the history sitting right under our noses.” Currently attending College in Tulsa, Emily spends most of her free time researching and exploring these magnificent pieces of Oklahoma, Kansas and Missouri history. 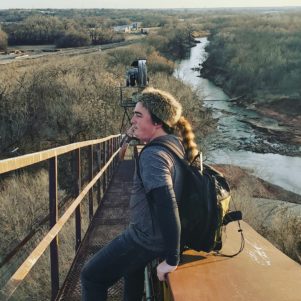 Michael Schwarz’s interest in film started at a young age when he first viewed the movie “Titanic” because of the emotions the movie evoked in him. He didn’t immediately start making movies but around the 8th grade, he started making short films for his school. By his senior year in high school, he was hooked and aspired to attain his degree in the film industry.

While making one of his short films, he was out scouting locations but was having difficulty obtaining permission to shoot on sites of currently active businesses. His friend told him about an abandoned circus (Gandini’s Circus) in Edmond, OK. Michael was intrigued and went to see the location for himself. With his camera in hand, he explored the location to see how to build a short film around this interesting site. After on-set difficulties, he realized another location was needed for his film. This time, he investigated the old El Reno, Oklahoma Rock Island Depot Railroad. It was perfect. This stirred Michael’s interest which lead him to other abandoned structures.

In January 2012, Michael saw a television newscast reporting an abandoned building that was on fire. This building, Dunjee High School, was a place Michael had visited before. That same day, he went to the school to photograph the remaining ruins of the building. There he met the widow of the former principal of the school. Her story evoked strong emotions in Michael because, through her tears, she revealed this building was the last tangible memory that remained of her husband. This story changed Michael’s perspective of abandoned buildings from this point forward. He realized they weren’t just buildings but places that hold history and valuable memories for many people.

By this point, Michael was already contributing to the website Abandoned Oklahoma. He has explored and documented over 100 locations in Oklahoma and continues this diary of bygone days to be preserved for generations to come.

No comments to show.

Images not found. This may be a temporary problem. Please try again soon.