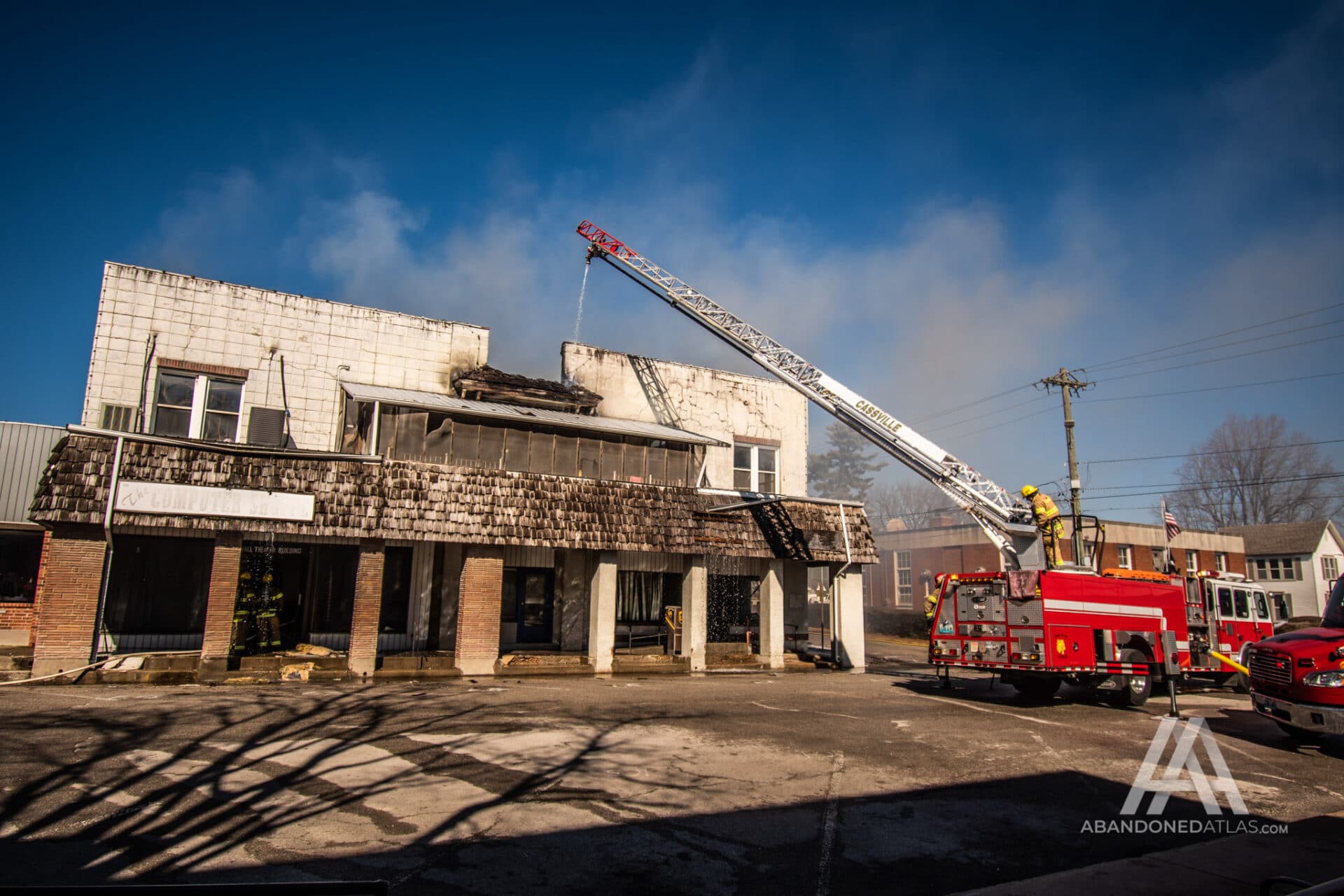 When I first heard and laid eyes on this building, it was unfortunately at the end of its lifetime. Our Photojournalist Billy Wade is oftentimes very intertwined in structure fire calls all around the Southern Missouri region. He had been called to the former Hall Theater for a three alarm fire that had almost entirely gutted the building. Having looked at his photos the outside of the structure looked relatively modern and I thought to myself it couldn’t be older than the 1950s-1960s. I was very wrong, what I was looking at was the demise of a building that was just shy of being a century old.
Just after the beginning of the year 1928, every other city within Barry County had a dedicated community building, except for Cassville. Although the community was definitely interested in one, one citizen wrote to the Cassville Republican newspaper stating,

“While planning for a community building, look well to the needs of your town for years to come. Let your building face the square, and build it large enough to answer all needed purposes, not only for the present but for the next generation. It is financed along the line suggested and will cost no one a great deal. Everyone in the county should be glad to see the best community building in the county located at Cassville, where we like to meet our friends from other parts of the county. I feel sure a building along these lines would be a better investment for the community than to put up a small, makeshift building which would advertise us to the world as non-progressive and behind the times.”

With that the city commenced on a handsome structure to serve the community. Otto Turner, a local, was awarded the contract for the construction of the building with a bid of $13,838. A site just left of the square was chosen which already had two buildings sitting on the lot and would begin dismantling them for the new building. The plumbing contract was awarded to Roller-Hodge Hardware, also a local company for $521.84. A ceremony was organized for the laying of the cornerstone on August 27, 1928 with a pretty big crowd and a speech given by Grand Master C.H. Briggs.

Not only was it used for community events it also housed the Cassville post office and fire departments, city library, and Shore’s Cafe for a number of years. Some of the events that graced the stage inside included fiddlers contests, movies, plays, organization meetings and much more. Senator Harry Truman and the Democratic Party held a meeting for WPA workers in the building in October 1938. All WPA projects in the county were shut down due to the event and many flocked to get a first-hand look at the Senator and hear his speech. In addition, another big event held here was the arrival of Robert Wadlow the Worlds Tallest Man in 1940. Below is a video obtained from the Barry County Museum of Mr. Wadlow entering the Cassville Community Building. The video was found in the Fields’ family home videos, an amazing record of this event.

Around 1944, Glen and Clairece Hall owners of the Ozark Theatre garnered interest in the building. With a vision for a brand new modern theater, the location was optimal for business being located in the square. Mr. Hall had worked out a deal with the Cassville City Council for the purchase of the building for $15,000. By this time Cassville Public Schools had erected a lovely accommodating gymnasium for its sports and events and the community building didn’t serve a huge purpose anymore. Money made from the sale would be used by the city to erect a smaller building on the lot for the city offices and public library.

Glen Hall started the next year executing his vision for improvements and changes made to the building that would ensure it was the most modern theater one could have. The Hall hired the Kansas City based Boller Brothers architectural firm to convert the former community building into the Hall Theatre. The Boller Bros. were extremely skilled in their work to build theaters and did work all over the country, one of those being the Booth Theatre in Independence Kansas.

They did an outstanding job turning the former community center into a 380-seat theater that the community raved about. On opening night August 15, 1946 a record crowd showed filling the theater twice. The film playing was“Janie Gets Married” and were loud in their praise of the building. All night the Halls received telegrams and words of encouragement from movie-goers. Cushioned seats, modern lighting, air conditioning, tasteful decorations and plenty of space were things only the larger city theaters had but now Cassville could boast the featured as well.

The building underwent another huge renovation in 1969 when the front facade was modernized. With its new Colonial-style and charcoal grey paint, trimmed with white shutters and a cedar shake roof it fit right into the 70s design era. The project was taken on by Stewart and Rose who had to of been some of the best given that the Halls only hired the greatest for their buildings. At the time the building also housed many offices including the State License Bureau, Ozark Production Credit Office, Meadors Jewelry, and Dr. Mary Merideth Office. The Halls lived in an apartment on the second story of the theater as well for decades which was a common thing for building owners back in the day.

George Roden remembers his days in the building, “Carolyn and I had a photography studio there in the late 80s. It was on the north side in the area that was once occupied by Dr. Mary Meredith’s physician office. Lots of memories, including going to the movies and getting my first driver’s license in that building.”

Diana Doty, whose grandparents Glen and Clairece Hall owned and operated the Hall Theatre for nearly four decades said, “Running the theater brought so much joy to my grandparents and my mother, but I know they would say what mattered was the community it helped build, and not the building itself.”

The Hall Theater along with many others experienced financial troubles throughout the 1970s-80s. The once-popular entertainment venue would shut down forever in April 1975.

Over the years many different businesses have resided in the building including Tomblin’s Jewelry, Helen Emos’ Sewing Center and Taggart’s Medicine Shop. Other businesses on the north side, Jan’s Fashions, Town and Country and Johnston’s. The Computer Shoppe and Asbury Land Title called the building home as well.

On March 1, 2022 Cassville firefights made their way to the West side of the square with reports of flames engulfing the building. Chuck Miner, Cassville Fire Protection District administrator said, “Without the ladder, it would have been much more difficult to control. We would have only been able to attack from the ground up. This is the first big commercial fire we’ve used that truck for since we got it three years ago.” He continued, “The wind blocked our vision for periods of time, especially for our ladder operator. At times, it was tough to see where to spray the water, especially when the roof started caving.”

The fire crew left the scene at around 4 pm that day after nine hours fighting the blaze. Only to return again shortly after when embers caught wind starting up a small blaze again. “While it hurts to lose it like this, my hope is that the loss can become an opportunity to continue building community in Cassville in new ways — maybe offices for small businesses, space for youth groups, or a studio for dance and music lessons. I am excited to see what happens,” said Diana Doty. It was said to be one of the most destructive blazes in Cassville’s history.

Gallery Below of Hall Theater

Unfortunately, the article has many inaccuracies (but, in all fairness, gathering the true and accurate information would be time-consuming).

Not sure which parts of the article you’re talking about but all of my sources are located in the Bibliography after the gallery. I spent quite a significant of time researching this location and most of the information I collected was from the Historical Society and old newspapers so if that information is incorrect then you’d have to bring it up to them.