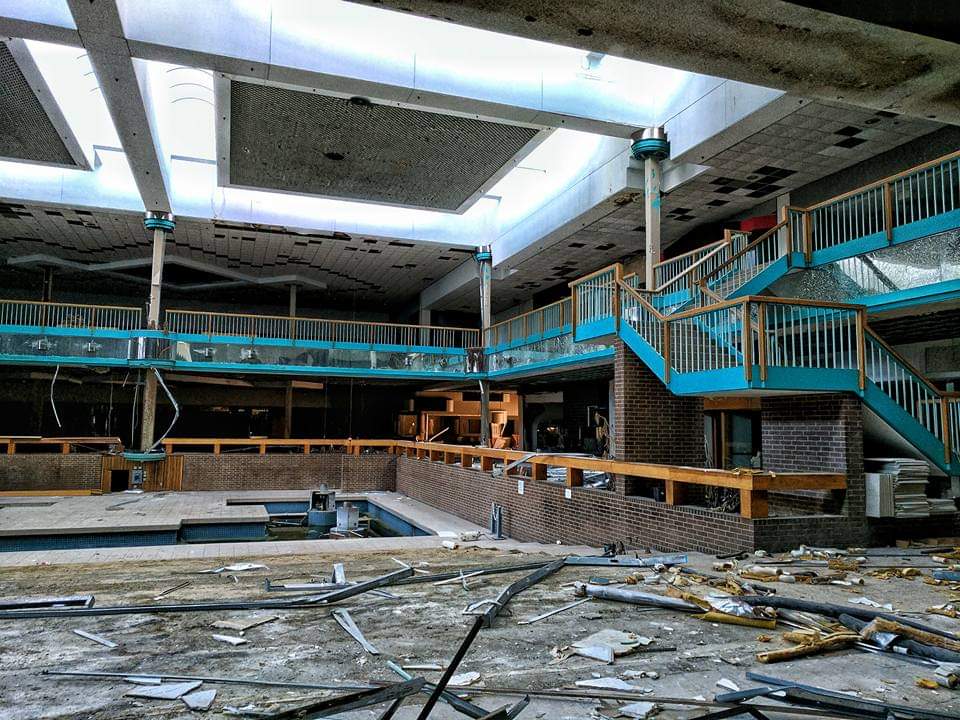 The Pleasure of Shopping… Metro North!

The Metro North Mall while a few years late to the surge of malls the 1960s still brought one of the best eye appeals of the 70s. The mall officially opened in July 1977 but unlike other malls which typically had two anchor stores, Metro North had four. Those four stores were JC Penney, Montgomery Wards, Dillard’s and The Jones Store spread throughout the two-story building. From one end of the mall to the other lay about 1,100 feet, long enough that you can understand why many of these malls had frequent visitors that would use them almost as if they were indoor walking tracks.

Going back to what I said about the architectural eye appeal of the mall its construction had two stunning fountains located in front of two of its anchor stores. An impressive art feature was located on the ceiling by Jones Store and a unique courtyard with a stage. The stage was surrounded by water with hot-air balloons features floating up and down around it. Similar to the stage at White Lakes Mall they also held magic shows, singing contests, and meet and greets with Santa.

Come For The Shopping… Stay For The FUN!

Christmas time at the mall was a magical experience. As a kid, I myself remember going to the West Ridge Mall in Topeka Kansas. Waking up on a Saturday morning groggily have breakfast only to then get ourselves together in the warmest clothes to brave the frigid temperatures from the front door to the car. Singing songs with the occasion sibling bickering going on in the backseat we would drive the thirty minutes into town dodging the crazy traffic only to arrive at an even crazier packed parking lot. Hurriedly getting out of the car with the number of toys we were about to see running through our heads. Almost as quickly as my little brother was bolting to the front doors while my mother yelled at him to come back and hold one of our hands.

Upon walking in the doors we were all greeted with a burst of warm air and within about ten minutes our hats, gloves, and scarves seemed unnecessary. Looking around we would see Christmas decorations galore. Giant ornaments hung from the ceiling, and numerous Christmas trees scattered throughout with angel kids on them. The light posts were dressed in tinsel and there, there at the end of a long line of people sat Santa surrounded by elves and presents. I’m sure that many others experienced similar memories in malls all across the nation.

Unfortunately the world doesn’t run on memories, if they didn’t I’m sure we wouldn’t have as many abandoned buildings as we do. Kansas City has had many malls abandoned and bulldozed over the years. Another that may be familiar to some is Blue Ridge Mall. The rise of technology throughout the 1990s and 2000s, the fad of online shopping sprouted and then quickly blossomed. Infomercial TV shopping also became a thing of convenience and with that shopping malls began to experience their slow demise. Stores also realized that reverting to online stores would save them from costs associated with physical locations and increase profit.

Plans for redeveloping the shopping center under a partnership with Alberta Development Partners were released in 2007. Metro North was to be turned into an outdoor lifestyle center. These plans never came to fruition with the recession hitting the following year and the passing of the mall owner. Metro North Mall was able to hang on much longer than most persevering into the 2010s.

New redevelopment plans with MD Management Inc. surfaced, with the intent to revitalize the shopping center that by this time had fallen to 17 percent occupancy with only one remaining anchor. These plans called for the majority of the present mall to be torn down and replaced by a smaller enclosed mall which would incorporate mixed uses in addition to the standard shopping mall. The redevelopment of the mall faced setbacks, but new announcements arose in May 2013 that MD Management Inc. was looking to raze the mall and replace it with a smaller, one-level enclosed mall featuring two anchor stores.

This was the nail in the coffin, its end was imminent and in April 2014 they could no longer afford to stay open as many stores including the important anchors left. The community rallied together to walk through one last time taking pictures and reminiscing on old memories. In August 2016 demolition on the mall began, leaving nothing but an empty slate only to build new shopping on top of the lot that once provided the same use.

Gallery Below of Metro North Mall