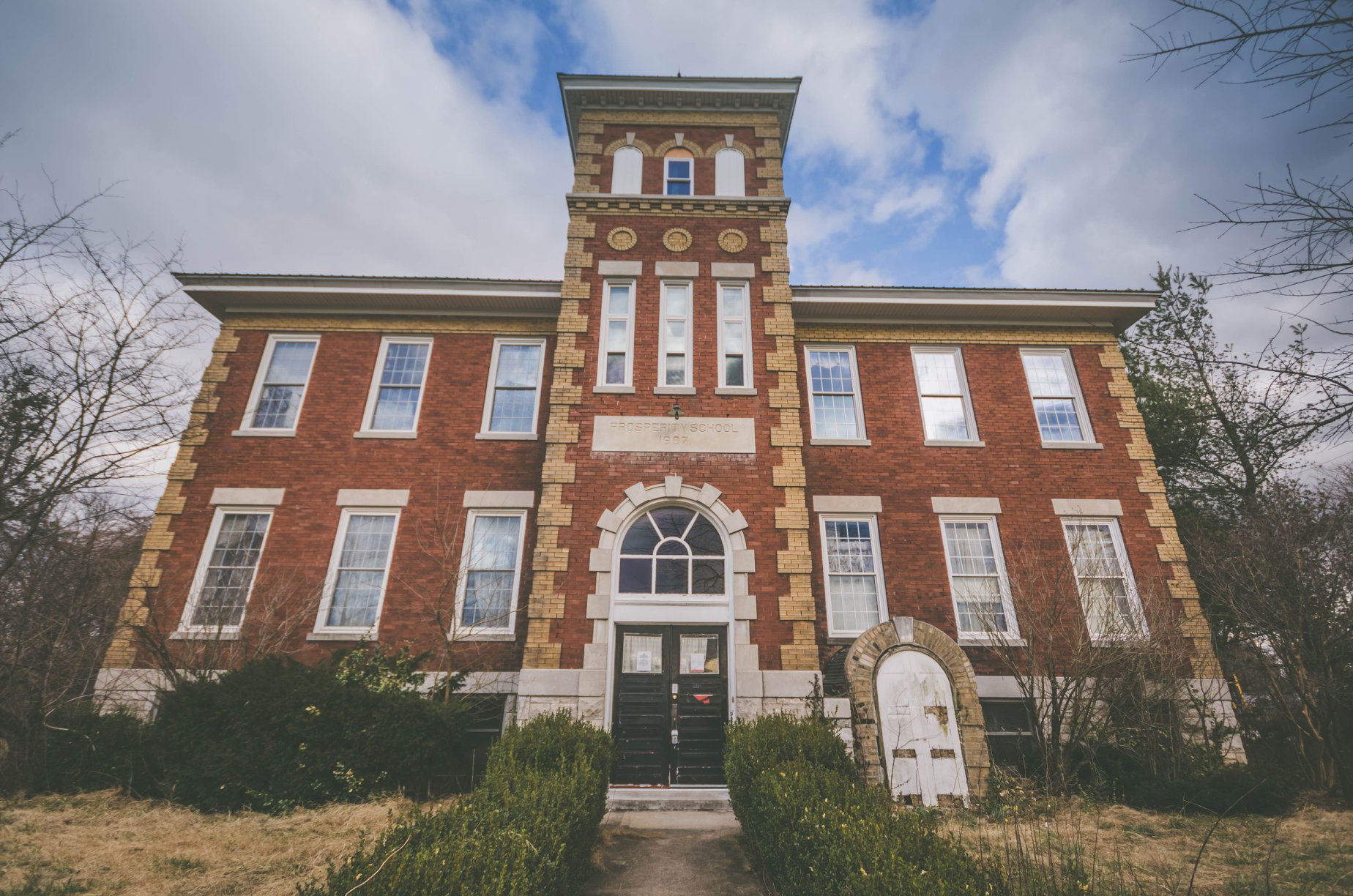 During the early months of 1907, the Prosperity School Board began discussing the possibilities of erecting a new modern schoolhouse. They claimed to have the biggest budget in the district and given that the old school was overcrowded they felt a new building was of necessity. Made of red brick with two-story above ground and a basement it was something the small town could and should boast about having. The district hired prominent Joplin architect A.C. Michaelis to design the school and the Tarrant Construction Co. to build it. Just a few years later the district spent money on repainting, construction of new restrooms and purchasing new books. Just going to show that maintenance and upkeep was important for the district before it ever became an issue.

The Prosperity School was given certification as a first class school by State Superintendent in 1925. The award was given to Principal Miss Pearl Stoneking. Prosperity was known for its”first class” attitude, creating students that would go on to become successful members of society. The same year it was granted the certification, Dixie Jacobs of Prosperity was also selected to represent all Joplin township schools in the county spelling bee. In addition to its prestigious teachings, it was also significant to socializing in the community. Holding speeches for the local church, basket dinners, parties, carnivals, reunions, luncheons and more.

But like small towns all across the US their status, credibility, and craftsmanship are no match for the federal government. A district that at one time enrolled 500 students and employed 11 teachers fate was decided in 1962. Voters had approved the consolidation of Prosperity with Webb City, Underwood, and Perseverance. This would render the building discontinued for school use but continued to be used by the community. That is until it was sold at auction on September 8, 1970, to John Southard for $1,500. During the sale, there was a provision clause that Southard take the property with a quit-claim deed.

John owned the property for twenty-two years before selling it in 1992 to Kevin Quinn and Cleo Copeland. They didn’t hold onto it for too long selling it to Pam and Roy Whyte in December 1998. It was their goal to turn the building into a bed and breakfast which they successfully did bringing new life into this historic structure. The short venture for the Whytes turned into an almost fifteen-year venture for Janet and Richard Roberts who purchased it in 2002. They continued to run the bed and breakfast while another entity conducted paranormal tours.

This all ended in 2016 when Richard, who became a widow in 2013, announced the closure of the bed and breakfast. One can assume that the amount of work that goes into running a bed and breakfast was partially to blame. It went into a foreclosure auction in 2017 to which no one bid on the building. These pictures were obtained in more attempts to sell the building in more recent years and it has now undergone restoration into a private residence.

Gallery Below of Prosperity School