The beginning of the Wheatley Provident Hospital starts in an entirely different location than the building recognized today. Dr. John Edward Perry moved to Kansas City in 1903, upon arrival there were only sixteen beds available at the city hospital for minority patients. Only sixteen beds to serve the 23,566 minority residents in Kansas City. Dr. John Perry was an African American physician, after moving he quickly realized the issues within Black healthcare that needed to be addressed and solved. He opened an office to work with other Black physicians in their fight to create accredited hospitals to serve the minority community. “I informed my wife of the saddened condition of our people as regards the inadequate medical care and my determined desire to begin an institution to correct this,” said Dr. Perry in an unpublished memoir, “Forty Cords of Wood.”.

In 1910, Dr. Perry’s strides were met with success as he opened his home to become a twenty-six-bed private hospital, the Perry Sanitarium and Training School for Nurses. Over the years he and other physicians developed strong medical and pediatric units making it a state of the art care center, bringing in minority patients from states near and far. “The health of my people weighed heavy on my heart,” Perry said. Most of the patients seen at the Perry Sanitorium were those requiring surgical operations, ones that Dr. Perry took head-on and performed successfully. In the first year, only 3 out of 108 patients passed during or after their operations there.

His success added to his desire for a larger and more equipped facility, the twenty-six beds at the sanitarium were not sufficient enough anymore. In January 1914 the Perry Sanitarium was taken over by the Provident Hospital Association. It was soon after that the Provident Hospital Association, Dr. J. Edward Perry, and Dr. Thomas C. Unthank collaborated on gathering funds for the larger hospital that they dreamed of.

From the very start, the Wheatley-Provident Hospital has been successful thanks to the people who supported it. The building chosen for the hospital was built in 1902 as St. Joseph’s Parochial School, it closed a short time later and sat vacant for nearly a decade until the organization bought it on March 13, 1917. The Provident Hospital Association, merged with the Phyllis Wheatley Association to form Wheatley Provident Hospital, which would become the name of the new building. With help from the Phyllis Wheatley Club, New Movement Association, Provident, Hospital Assoc., and the community a twenty-day campaign was launched to raise the $25,000 to refurb the building. It was dedicated on Sept. 29, 1918, with a parade and crowd of around ten thousand, the first Black hospital in Kansas City.

Wheatley-Provident quickly grew in popularity near and far, making breakthrough achievements in Black medicine and nursing. In February 1920, opened a clinic that would average at a cost of around $3,000 per year. Miss I.B. Lee was placed in charge, the clinic was open daily from 12 to 1:30 p.m. with all services free. And then in another expansion of services a children’s ward was formally opened on April 23, 1923, equipped with standard hospital equipment that would not only better the care given to the children but better the education of the nurses and physicians practicing there. Dr. Katherine Berry Richardson, a co-founder of Children’s Mercy Hospital, was essential in making this happen for Wheatley-Provident.

The ward originally had fifty beds and twelve bassinets but later was enlarged to 67 beds. In 1929, the lead pediatrists of the children’s ward were Dr. Walter H. Maddux, Dr. H.B. Lyon, and Dr. W.W. Caldwell. In 1926 a two-story addition on the north side of the building was completed, designed by the architecture firm Hoit, Price, and Barnes. Once again this was made possible by the community after the land for the addition was donated by Mr. William Volker. On the first floor, the clinic was housed and the second floor was home to the children’s ward. It was the only “grade A” Black hospital completely staffed by African Americans, as a testament to founder Dr. J. Edward Perry worked as superintendent completely without pay.

Wheatley Provident Hospitals’ success was met with a capacity issue. The growing number of patients flocking to receive the best care for African Americans around did not have enough beds to serve the community anymore. In the mid-60s a new campaign and fundraising effort was underway for a larger location, this time the price tag would be into the millions. Wheatley Provident’s ownership had changed into the hands of the Greater Kansas City Baptist and Community Hospital Association and there were talks of the new hospital being named “Baptist and Community Hospital”, this didn’t see the light of day though. Once again though, the community saw the need for a bigger minority hospital. 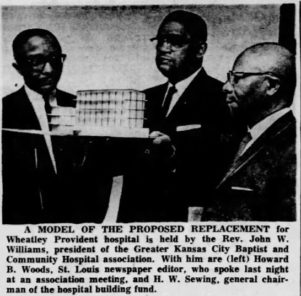 Martin Luther King Jr. Hospital was designed, including 65 beds, federal, state, and organization funding was to cover the difference in funds that couldn’t be raised by the community. Funds were met and a site was picked off of Euclid Avenue, on February 7, 1970, 1,000 spectators met to witness the groundbreaking of the new hospital. “Today’s activities show us that Black people can get together with Whites. However, this is just a beginning, for we still have a long way to go. We don’t want to stop with a 65-bed hospital we are going to move forward and construct a 100-bed hospital,” said Dr. John W. Williams, president of the Greater Kansas City Baptist and Community Hospital Association. Mayor Ilus W. David spoke at the ceremony, “The hospital is many things. It is faith that it will be built to serve the community, hope for people to get better medical services, and charity by all who took part in the fund drive. I call on all people of Kansas City to join together in a ‘Hands Across the City’ program in support of this hospital. Let’s build a 100- bed hospital. Let’s not stop there, lets equip this hospital. And let’s raise the money needed to pay off its debts.” On June 12, 1972, the last patients of Wheatley-Provident were moved to the new Martin Luther King, Jr., Hospital ending the legacy of Wheatley-Provident Hospital as they knew it. 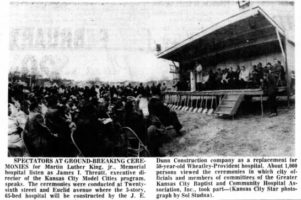 It was briefly used in the ’80s as a haunted attraction called The Asylum and then from 1992-1996 as Dr. Deadly’s Haunted Hospital. It was then abandoned again, talks of demolition came quickly after. In an effort to spare time, Wheatley-Provident Hospital was added to the National Register of Historic Places in 2007. Historic KC published the hospital on its “Most Endangered Buildings” list, which calls attention to properties of historical significance that are vulnerable to demolition. The Wheatley-Provident Hospital has been on the list since 2012 and is part of a broader endangered district, which Historic KC calls “18th and Vine and African American Heritage Sites.”

As of 2018 a redevelopment group bought the property in hopes of turning it into offices. While work has been slow going, stabilizing and securing the neglected hospital has been the main focus. Debris has started to be cleaned out as a few industrial dumpsters sit outside.

This building is not to be accessed unless given permission by the owners, it is an active construction site and those caught on the property will be prosecuted for trespassing.

Gallery Below of Wheatley Provident Hospital