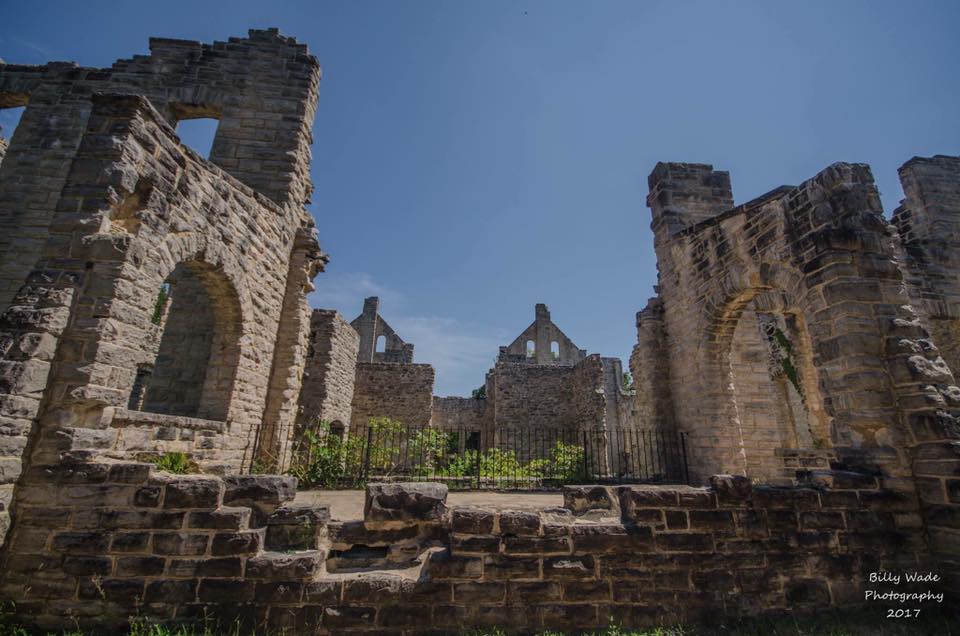 When driving through the Ozarks of Camden County one can expect to see an abundance of sparkling springs, waterfalls, lakes, caves, and acres of trees. The Ha Ha Tonka State Park is comprised of a huge lake and 3,751 acres of wilderness. The name Ha Ha Tonka is said to mean “Laughing Waters” in the native Osage language.

In the early 1900s, Robert M. Snyder a wealthy Kansas City businessman had begun visiting the area. Growing fonder and fonder of the lush scenery that surrounded the land and began searching for land to purchase. He was able to acquire the whole park which at the time consisted of 2,750 acres. With bright plans to build a $75,000 fortress, Snyder spared no expense to make the castle of his dreams. A three-story, European-style home with more than twenty rooms and a center atrium accompanied by a skylight.

Construction started in 1905 with materials being gathered from around the area as the land had an abundance to give. He took $125,000 out from the Bank of Lebanon solely for labor alone, this would bring the total cost of the project to over $200,000 when it was all said and done. Sandstone was quarried from nearby and mules with wagons and a small temporary railroad was created to get them 25 miles to the remote location. But work was then halted the following year after Snyder passed away. But with the dedicated work of his widow and brother George P. Snyder, they continued to make the dream come true.

Scattered throughout all the spacious forest and hills would also be a water tower, stables with the capacity for 100 horses, and a world-class greenhouse. Carloads of glass for the greenhouse would make their way up the hill. It was to be two acres and the largest private greenhouse in the world where he planned to grow peaches, grapes, figs and oranges. Ten greenhouses were halfway constructed just west of the mansion but were never finished. The mansion was 80×100 feet and lays 250+ feet above the lake.

For many years though the mansion remained unfinished as life passed by. The exterior was completed but even by 1919, twelve years after Snyders passing the inside remained a shell. In 1921 one of Snyders sons, Robert Jr. who was one of their heirs including his two other siblings completed the interior furnishing 15 rooms and moved into the house himself. The lower part of the Ha Ha Tonka Mansion remained unfinished and Robert Jr. insisted it probably never would.

After using it for a few years as a summer home Robert Jr. abandoned the home. Windows were busted out, birds built their nest in the rafters and water poured through the ceiling. It seems so strange to leave a house unfinished for 17 years and then put five years of hard work into it just to leave it abandoned.

In 1930 both heirs, brothers Leroy and Robert Jr. had part of the 165-acre tract of land, specifically the house condemned by federal judge Albert L. Reeves. The reasoning was due to flooding caused by the nearby Bagnell Dam development project underway by the Union Electric Light and Power Company that asked the mansion be condemned but the abandonment also contributed. The Snyders were awarded $350,000 in damages from a jury but the house remained condemned. Three years later and the Snyders still weren’t satisfied with the verdict calling for a rehearing arguing that condemnation impairs the jurisdiction and power of the government. They said this of the proposed rehearing,

“We insist the question before this court is of vital public importance, the petition to the appellate court states this. “It affects not only the right of a citizen to resist the taking of his property for a private purpose but also impairs the jurisdiction and power of the federal government over navigable waters once it has permitted a private company to build a dam and employ the power thus created for profit.” It also stated that “the court overlooked the material fact that the damage to Ha Ha Tonka did not consist merely in its flooding but that the great injury resulting from the fluctuation of the water level due to operation of the power plant” and that this operation was subject to change on orders from the parent company.” Another error cited by the court was that “the facts in the record show that the plaintiff (power company) had physically appropriated the area above the 66-foot line by the cutting trees therefrom, spraying oil theron and exercising other acts of dominion over the same.”

After the lawsuits settled the Snyders provided a lifetime lease to Josephine Ellis of Kansas City. She began rehabilitating the property for the next two years opening it up in 1939 to be used for many private events. No one could get over the absolutely stunning views that surrounded the property. Trees towered over you for miles and miles, the sounds of running water came from nearby creeks and rivers, it was amazing. Some of those guests over the years included Dr. Hawkins from Fort Smith Arkansas who came to stay at the castle in 1939. Also around that time a luncheon was held at the castle for guests from Lebanon.

An annual Garden Club Party was held which typically brought in dozens of ladies for the luncheon meeting. The Fifth District of the Missouri Federation of Women’s Club held its annual meeting at the castle in 1940 with over a hundred guests turning out to admire the beautiful grounds. A gentleman by the name Leon Foreman held his marriage at the castle. The rotary meeting was also held here along with many other clubs.

Just shortly after reopening to be enjoyed by the public again, tragedy struck. On October 21, 1942, it was a chilly fall day and embers sat from a past fire in one of the many fireplaces. One of those embers seemed to make its way to the dry shingle roof and immediately engulfed the rest of the roof. It was first noticed around 11 am and quickly became too big to fight without firefighters present. The flames quickly spread to the nearby garage roof about a hundred yards away. A crowd gathered at the bottom of the hill amounting to about 3-400 bystanders watching the castle burn down. Flames also spread to the tower but two school boys were able to salvage it from succumbing to flames. Johnnie Heavner and Donnie Blair went to the top of the tower tearing off shingles to prevent them from burning and beating out flames with their sweaters.

Mrs. Josephine Ellis who put so much work into restoring the castle and opening it back up was obviously heartbroken over the fire and loss of the castle. She wrote this on the one year anniversary,

“You often hear people say “keep your chin up and keep smiling”. That is easy to say, but very hard to do. Just a year ago, October 21, I felt like I could never smile again or hold my chin up but with Gods help and the kindness of the Camdenton people and my own will power I have won, nothing can keep me from smiling, or keeping my chin up.

One year ago the beautiful Ha Ha Tonka Castle was destroyed by fire. At that time I felt like my heart and soul went out with the flames, for I loved everything there. Every piece of furniture, every rock and tree was so close to God. I never was lonely all though far from my loved ones. I cannot live in the past – I want to thank everyone again and again for all the kindness that was shown me during that time. I also want to thank Leroy J. Snyder, the owner, whose loss was far greater than mine but during those dark days he had nothing but kind words and sympathy to offer. Again I thank you one and all.”

For the next 36 years, the ruins would lay abandoned to be reclaimed by nature and continue to crumble. Since the beginning of Ha Ha Tonka Castle’s existence, the land surrounding it had been a topic of conversation in turning the acreage into a state park. Legislation went up the ranks but ultimately didn’t meet success. That is until 1978 when the conversation was sparked again. The Department of Natural Resources purchased the estate and surrounding land, a total of 2,440 acres and opened it to the public as Ha Ha Tonka State Park.

Within the next ten years efforts to revitalize the castle were made starting with the stabilization of the structure. The east wall was partially deconstructed and then rebuilt. A-1 Construction was given the contract for the $412,000 worth of work to restabilize the building damaged by wind and mortar erosion. Also in the plans were efforts to rehab the old post office building south of the mansion.

No other work in a grand capacity has been done to the mansion to this day. The ruins are open to the public to visit and walk through. If you do go, make sure to bring your imagination to picture what this grand palace once was before that fately day in October of 1942.