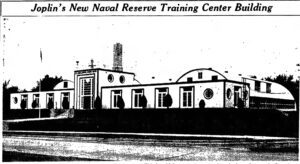 Dating back to March 29, 1947, when Vice-Admiral G.D. Murray was sent to Joplin to select the site of a brand new Naval Reserve Training Center. Soon thereafter construction began but took almost two years to fully complete to ensure that every aspect of the building was built to last. It had a capacity for administration and training of 230 Naval Reservists. The building grounds consisted of 3 large Quonset-like structures and then a main head house building extending across the front. The headhouse contained the administrative offices, training-aids library, and lounge spaces. Each Quonset is dedicated to something different, the left Quonset is devoted to electronics, radio, radar and hospital space. The center Quonset contained the drill hall and armory while the right Quonset was space for shops.

The grand opening of the center was held on September 29, 1949, with the famous Blue Angels set to commemorate the opening with a demonstration. The training center quickly got into the swing of operation, hardly experiencing vacancies. It wasn’t long before additions and improvements were needed. The addition of another building was completed in 1954 to provide classrooms and storage space. It was constructed on the back end of the three Quonsets by the Kerr Construction Company.

It would eventually become a naval and marine corps training center bringing many service members to Joplin. For years it served the community and brought up some great recruits that went on to have very successful military careers. A former naval reservist said, “We shipped out from there and went to either Great Lakes or San Diego for training.”

But for a reason unknown at this time, the Naval Reserve Training Center closed in 1993 becoming abandoned. For over 20 years the building became neglected from time, nature, and vandalism. In March 2016 demolition of the former Naval Reserves building began for a cost of $140,000. Most of that cost would go towards asbestos removal being as the building was rife with it, even the glue on the floorboards having it. The foundation of the building was left so the parks and recreations department could use it to build storage on top of it.

“World’s mightiest naval reserve” in Joplin set to be demolished