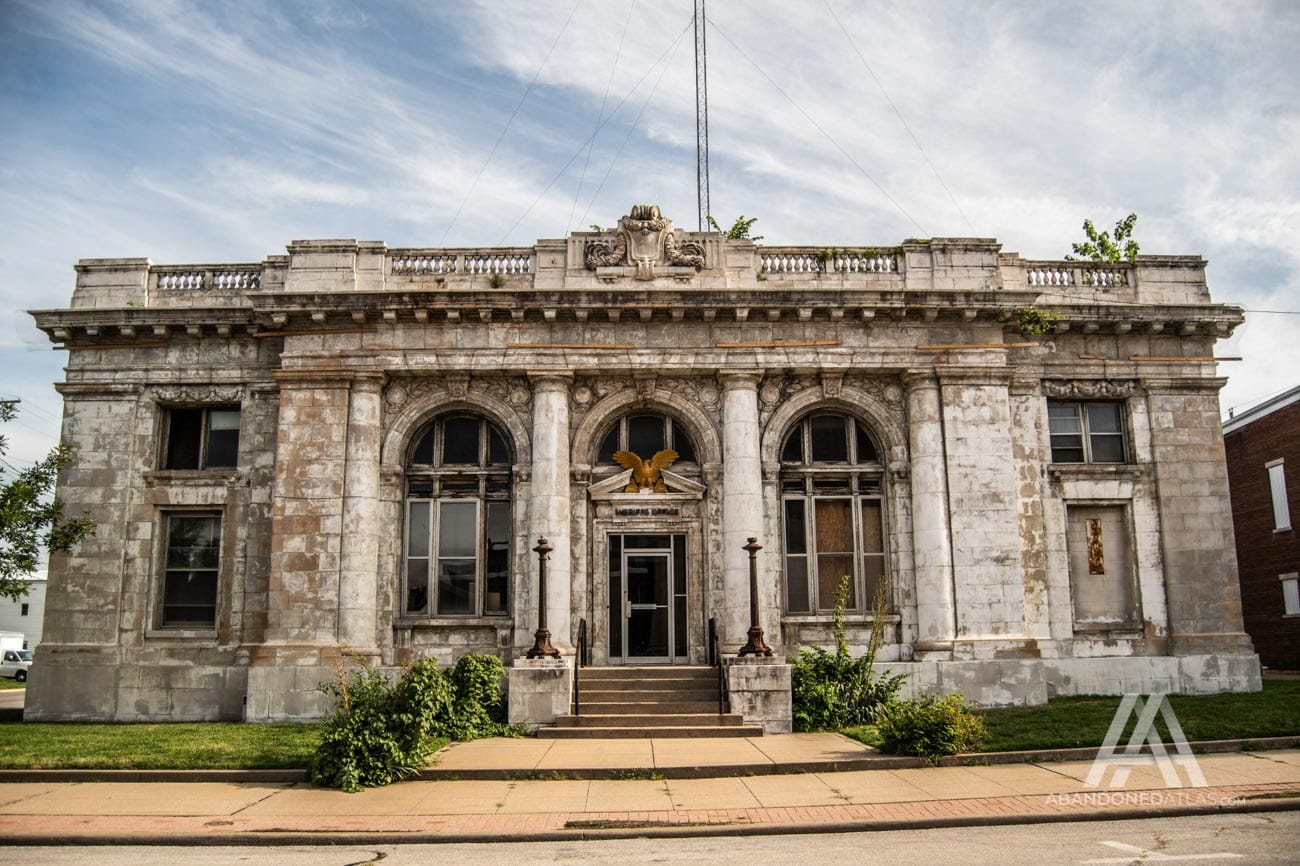 It is once in a blue moon that I come across architecture that stops me in my tracks. The former Vernon County Jail building in Nevada, Missouri is that once-in-a-blue-moon building, and currently, it’s for sale. So how did this beautiful building become abandoned? Was it always a jail? No, in fact it was the United State Post Office for Nevada for over 50 years!

The need for a modern large post office building became a prominent topic of conversation for the City of Nevada in late 1907. Plans for the building were drawn up and submitted by a supervising architect from Washington D.C. Postmaster O.W. Neff was instructed to open up the contract to bids and one was accepted for $35,000. But shortly after the firm claimed a clerical error was made in the price and backed out of the contract. The postal department allowed for a re-letting of the contract which was then awarded to Contractor J.A. Daly. Daly received the drawings from James Knox Taylor who was the Supervising Architect of the United States Department of the Treasury.

The building would be constructed of fine grey brick, terracotta trimming and have two entrances. One would face Cherry street and the other Ash. Daly sublet the brickwork contract to Messrs Robbins, Hedges and Duncan. Terrazo flooring consisting of concrete and white marble chips would be spread throughout the building. Excavators made their debut on the property just after the new year in 1909. A small workshop house was built on the property to store tools and materials in. The hope was that the weather would permit long enough to finish the excavation within 30 days and then work could commence on the foundation soon after.

The contract called for completion of the building by October 1909 and had a funding appropriation of around $75,000. It would be two stories with an 11-foot basement and the outside would be constructed of the same stone used on the Vernon County Courthouse. The pension and post office inspection department would reside on the second story. The main entrance would include a revolving door that would later be replaced with double doors in 1934.

It was designated a first-class post office upon its completion and occupancy in 1910. Nineteen years later that classification would be rescinded to a second-class classification by folks in Washington D.C. But just a year later with thanks to the Weltmer Institute of Suggestive Therapeutics dealings, receipts had increased substantially earning its first class title back. One Postmaster W.F. Crigler was honored to have. In the years following receipts would continue to increase.

In 1961 a new post office facility would be constructed at 104 S Oak St, Nevada, MO 64772. The former building was vacated making way for the Vernon County Sheriff’s Department to move into the building around 1963. The renovation job was estimated around $50,000 and would be inspected by the county official upon completion. Fitting the building with jail cells and office spaces for the Sheriff and amazing architectural details above the outside entrances that are still visible to this day.

Some of the most interesting stories to come from the jail over the next half century are included below:

Springfield Leader and Press Aug 24, 1965 – James L. McGee, 32 alias Roy Huddleston, who escaped from the Vernon County Jail Monday was still at large today. The man pulled an automatic pistol on a deputy while he was being transferred from one cell to another. Sheriff Wayne Pursley said McGee may have gotten the pistol from some clothing that was taken from his car to the cell. The man is considered dangerous.

Just before his escape McGee waived extradition to Chicago on an armed robbery charge. He was picked up by Nevada police last Thursday after a service station attendant complained McGee tried to short-change him.

The Springfield News-Leader May 2, 1989 – A Webb City man who was jailed for escaping from custody fled the Vernon County Jail but was recaptured two hours later. Billy Fahnstock, 25, escaped Saturday from the VC Jail where he was being held after he broke out of the Jasper County Jail in February. Fahnstock was recaptured several weeks later in Vernon County after the incident.

In his latest escape, Fahnstock hid in an empty vault Saturday afternoon after sheriff’s department officials opened the door leading to the cells that is used for ventilation purposes, deputy sheriff Ted Thomas said. The jail housed in a former post office has several empty vaults throughout the building.

Fahnstock eventually made his way to the roof and shimmied down a pole. A dispatcher on her way to work eyed Fahnstock and asked why he was out. Fahnstock informed her he made bail. After realizing bond was not posted the dispatcher told sheriff department officials he had escaped.

After two hours of freedom Billy was captured by sheriff officials in Northern Nevada. He was originally in custody on charges of burglary and forgery. Jasper County officials have since filed an escape charge against Fahnstock and escape charges are pending from Vernon County as well.

Eric Moore 24, of West Covina Calif. and Walter Johnson of Fairfield Calif. were missing from their holding cell at the 11:30 am regular cell check said Louise Morain, VC Dispatcher. Sheriff Brian Atkinson said two other inmates serving federal life sentences had been in the same cell but apparently did not try to escape. In fact some of the paneling the escapees pulled away had been replaced by at least one of the inmates, Atkinson said.

“We’re lucky we just lost two and not the whole bunch,” he said. The prisoners sawed through a latch on their cell door with hacksaws that had been smuggled in portable radio-cassette players, the sheriff said. They tore away some wall paneling, opened a window and fled into a parking lot. They shed their jail clothes and probably left in their underwear he said.

The sheriff said surveillance cameras were scheduled to be put in the cell area on Thursday but installation was delayed. The cameras were to comply with federal guidelines for housing federal prisoners.

Both men had been jailed in Verdon County since July 10. They were being held in the county jail through a housing agreement with the U.S. Marshal Service. Ten federal prisoners have been held in the jail since July 10th for $35 daily, due to a lack of space in federal institutions. The remaining eight prisoners were moved to St. Clair County Jail on Thursday.

And the escapes didn’t stop there, I found dozens more of newspapers detailing many other escapes from 1964 to the end of its time in 2009. This is and being very outdated led to a new facility being built for the county.

After its closure in 2009, the building sat abandoned slowly being forgotten about. Interest in the structure was drawn up again when the distinct building went up for auction during a surplus property sale. The building at this time was showing some wear and tear but in relatively good shape, those with an eye for abandoned restoration are able to see a vision past these damages.

In an attempt to make the property more attractive to potential buyers that may be unaware of the tax incentives that may be available for a historic building like this some citizens have called attention to getting the building listed on the National Register of Historic Places. It is eligible but has not been officially listed. It was purchased with the owner having intentions of restoring the building but seems to have never gotten around to it. In a further attempt to draw attention to saving this one-of-a-kind historic building the Missouri Preservation Alliance listed the building on its Places in Peril lists of 2017 and 2018.

It is once again being advertised for sale with the hopes of finally finding a developer that will turn the property into something equally as beautiful as it once was. Becoming a highlight of the town once again.

If you are interested in purchasing this building please contact Andy Remington of Curtis & Sons Inc. Phone: (417) 667-7868 Email: andyremington@hotmail.com

Gallery Below of Vernon County Jail