In February of 1895, a new City Workhouse for Kansas City was proposed by Alderman Morgan. But with that marked a new age of public structures. Workhouses were often a source of shame for a city and with this new workhouse, the hope was to create a building of stature, glory. Kansas City wanted to make the outside glamorous to appease the general public, not the prisoners. “We have the money necessary. There’s $99,000 in the expense fund derived from the interest on unsold water-works bonds. All the departments are clamoring for a slice of it. After paying the attorneys $62,500 of it, giving $12,000 to the fire department, $7,000 to the park board, $2,500 to the hospital, $2,000 to police, and $500 to the mayor’s charity fund, there will be $12,500 left. If this is appropriate for a new workhouse the division will be fair. We can build one for that amount.” said Morgan. And with that, a new workhouse was underway being designed by architects A. Wallace Love and James Oliver Hog.

Prisoners quarried the stone themselves and assisted in building cutting down costs tremendously but the total cost of construction still came out to be more than double what was expected at $25,700. On December 20, 1987, the last prisoner was moved out of the old and into the new “castle” like structure. It was said to be “the best-equipped prison in the state.” The one hundred prisoners were shackled together in quads of eight. They were removed from their cells, stripped and given a tough scrubbing, then given brand new clothing as their old clothing was set aside to be fumigated and boiled for use again. As they were moved into the new facility shouting like children when they were marched from the filth of the old prison into the cleanliness of the new. Superintendent Brant, of the old and new facility, said to them “In here you’ll have plenty of fresh air, good, food, and clean clothing. You have got to keep clean in here and if you don’t show a willingness to keep clean you’ll be forced to keep yourselves and everything about you clean. You will be required to take a bath twice a week. You will have to wash your face and hands before every meal. The man who spits on the floor will be put in the dungeon. No filth will be allowed anywhere.”- Kansas City Journal Dec. 21, 1897

The men’s cellblock was 30 feet wide and 115 feet long with 3 foot thick walls. Floors were made of cement and slanted with gutters to allow for proper drainage when cleaned. Two rows of cells came to a total of 28 with four bunk beds per cell. The capacity of the prison was 112 men, there was a steam fan in the basement that pumped fresh air into the corridors and cells at all times, a luxury most prisons even today don’t have. In the winter this air went over coils to heat it. The showerbath was big enough for five men to use at a time and across from that were closets and six sinks. The women’s cellblock was on the second floor of the workhouse containing only 8 cells with one bathtub. Then there was a “boys”  cellblock which was thought up by Superintendent Brant, containing just three cells with an adjoined bathroom. The room contained blackboards on the wall and desks and benches to act as a schoolroom.

Prisoners were often petty offenders such as beggars, drunks, debtors, and thieves. As part of their sentencing, the inmates were required to work. Female prisoners sewed prison uniforms and the men labored for the city’s Public Works Department. But after years of repeat offenders, lack of progress, mistreatment, and conditions becoming disheveling again there was a call for change. 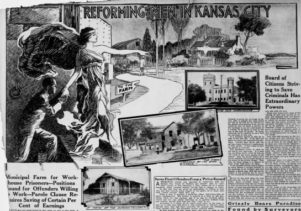 The Municipal Farm was supposed to just be an experiment created in 1910 as a new way of reforming prisoners. The workhouse was overflowing and the only way to fix this was by having the mayor pardon out the old inmates. This only resulted in a constant flow of inmates coming in and out of the prison. Because municipal work in Kansas City was scarce most inmates weren’t even able to do the work they were sentenced to. A Board of Pardons and Paroles was created to help tackle the issue poisoning Kansas City. One of their first innovations was to send the prisoners from the workhouse to the municipal farm. Located in Leeds was the 137 acres that welcomed workhouse inmates. Upon arriving they received new clothes, a shower, and put on a nutritional diet, then put to work. The prisoners helped construct a superintendent’s house, a tuberculosis sanitarium, a 450 men’s jail, as well as helped build the women’s reformatory municipal farm.

The Board of Public Works continued to use the workhouse as a garage and repair shop temporarily but was shortly after, an ordinance authorized the Board of Public Works to lease the workhouse and property to the Reserve Officers’ Association as an armory and officer training school. The lease submitted was for two years with a two-year reserve clause. The ROA’s annual rent was a measly $1. The ordinance also said the BoPW mustn’t spend more than $5,000 repairing the workhouse and no more than $500 on heat and electricity per year. In October of 1924, the BoPW authorized payment of half the $5,000 to make repairs for the officer training school. The remaining $2,500 would be made available in the following months for the heating and plumbing to be installed. The newly repurposed workhouse had areas for lounging, lecture rooms, headquarters for different branches, a small gun range, and equipment to make it a training center. After the lease was up a new headquarters was established elsewhere and the ROA officially moved out on November 10, 1927.

As of September 1927, The Kansas City Star reported that the workhouse was being remodeled to house ambulances, employees, two mechanics, and nine drivers. “We expect to save from 7-10 minutes on each call. Now the ambulances go from 25 St and Grand Ave. to the General Hospital to pick up a doctor. Under the new arrangement, two ambulances will be kept at the hospital all the time. When one is out another will take its place. In that way no time is lost.” commented Dr. Cavaness. This arrangement might have been an insight into what was to come for the workhouse property.

On Nov. 1, 1930, L. C. Johnson, director of the fire department, announced that No. 11 fire station would be abandoned and rebuilt on the workhouse property. The No. 11 fire station was made up and ran by an all-Black crew. The cost of the new station was $29,500 and would come out of the fire department’s improvement bond fund. A celebration of its opening was held at 3:30 p.m. on Sept. 27, 1931. This building is now the Vine Street Studio & Art Gallery.

In its later years, it was mostly used for storage, reportedly abandoned in 1972 entirely I couldn’t track down what the last use of the castle was. The building sat without much notice while being reclaimed by nature until Daniel Edwards and his then-fiancée, Ebony Burnside chose the castle as the site for their summer wedding. “We had a vision and an idea of something that we wanted to do,” says Edwards. “The main purpose of this was to help with alleviating blight of abandoned buildings in the neighborhood.” Edwards got in contact with the owners and offered to clean up the space in exchange for holding his ceremony there. A grant of $12,000 was given from the Community Capital Fund to assist in the cleanup costs. Daniel reached out to the community for help in this project accumulating around 350 volunteers. Over the course of six weeks, tons of garbage and trees were removed from the property. Revealing the perfect clean space for their wedding ceremony.

After all the hard work put into the space Daniel Edwards, an architectural engineer, wasn’t entirely done with the space. He and the property owners had a deal to sell the castle to newlyweds Daniel and Ebony Edwards. Another grant was given, this time by the Kemper Foundation, so that the Edwards’ could embark on a 23-day journey to visit every major jazz festival and venue in the world. This would hopefully jumpstart plans of turning the City Work House and the Public Works building across the street into the Jazz Capital of the World. Because the owners saw how much community support and outreach was happening the original deal of $150,000 got bumped up to $1.5 million. Daniel reassured me that there was no bad blood between him and the owners. He decided to put a positive spin on it by delving deep into his MovementKC, which translates to “move-me-into-KC”. MovementKC has taken on the giant task of revitalizing an entire neighborhood, not just through housing but through community and social infrastructure. “It’s just a different approach, instead of doing this one-by-one transactionally what if we did this together as a community. We get to know each other beforehand and hang out and get to know each other, it’s creating a community before the community is rebuilt,” continued Daniel, “Currently we are focused on what we’re calling “The Pilot” which is full neighborhood redevelopment on a miniature scale. We are building four new construction homes and bought an abandoned daycare across the street that we will revitalize into a safe space where Black and Brown ideas can come to prototype any ideas they want.”

MovementKC is always looking for volunteers, donations, and artisans to hop onto the project. As for the historic City Work House unfortunately in the more recent years, it has become the canvas for vandals and graffiti artists more-so now than before Daniel and Ebony Edwards and volunteers did their cleanup.

Gallery Below of City Workhouse

Great work again Emily. Thanks for the investigation and writing you do for this web site!