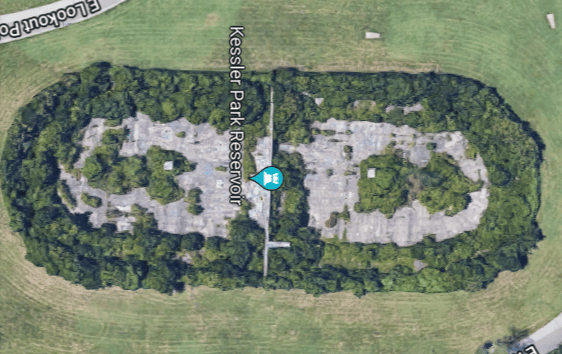 What was first called North Terrace Park has now been renamed to Kessler Park, hence why this location is most commonly known as the Kessler Park Water Reservoir. The idea for the reservoir came around 1918 when developments in the East Bottoms began to take off. In order to supply water to the area it was brought from the Turkey Creek pump station across town in the West Bottoms. This obviously proved to be costly for the city and something had to be done to remedy the costly inconvenience.

The Board of Fire and Water Commissioners approved a plan to create a new reservoir closer to the Northeast and East Bottoms districts. The plans were initially pushed off until after World War 1 subsided at the end of 1918. Work officially started the following year, the tallest point in the park was picked as the site for the reservoir. E.H. Bradbury was hired as the contractor but was given a unique task of another job as well. 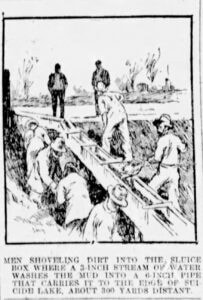 Just down the hill was what had been referred to as “Suicide Lake” and for years it had been suggested by the public and officials that the lake be filled in as it was a danger to children being located in a park. So officials saw the opportunity to kill two birds with one stone having a huge hole dug in the park and using that dirt to fill the lake. Bradbury was the one tasked to figure out how exactly to do that. His solution was to use a 6-inch pipe down the hill which would allow the team to shovel dirt into the pipe and wash it down with water to make a muddy mixture.

By November the 15 million gallon reservoir was nearly 3/4 complete. The altitude paired with the weight of the water gave the territory pressure equal to that in any of the city mains. It took on a perpendicular oval shape, was made of concrete walls with an iron fence. The circumference of the reservoir was roughly 1700 feet long. The final cost of the project cost roughly $130,000 with the iron ornate fencing alone costing ~$5,000. The dividing wall would be made of reinforced steel and feature a walkway halfway between.

The project was completed just after the beginning of 1920 but it wasn’t long before “problems” were suspected. A “leak” was said to have been coming from the North Terrace Park Reservoir. But upon inspection from Charles S. Foreman, Chief Engineer for the Board of Water and Fire he found that rather than a leak it was just a spring that had formed and overflowed from heavy rains. But that didn’t convince everyone. Two months later in August 1920 water was still pouring onto the road below threatening to “under mine” it. So officials had Charles S. Foreman drain the north basin of the reservoir down to 1/2 a million gallons of water which he then treated with a lime solution. A day later the north basin water and the cliff water were tested and compared and found not to be the same. The same test was done with the south basin and then it was decided both basins would be drained completely dry until the source of the water could be found. Officials, stumped as to what was causing the leak had by September determined it was not the basins and began to refill them.

But the fact that the area had never experienced water flowing like this before the reservoir was built seemed damning enough to pin it on the basins even without hard evidence.  In 1920, some 122,000 gallons of water escaped down the hillside. A tile drain was installed in the park to help drain the many gallons of water and in an attempt to combat erosion to the area.

In 1926, a new pumping station with its own reservoir was completed in the East Bottoms rendering this one unneeded. The old reservoir was drained and held in reserve by the Water Department for possible future use but that day never came and by 1931 was officially declared “abandoned”.

In 2015, the Kansas City Design Center began brainstorming and creating plans for an adaptive reuse option for the reservoir. The neighborhood approached KCDC in 2019 to conduct the next phase of design development studies, which capitalizes on the previously completed work and engages the community to assert their collective vision and provide basis to pursue means of its execution. But nothing has officially come of the renewed interest. After decades and decades of abandonment and discussions about how to turn this overgrown and graffiti-ridden oasis into something productive, will it ever come to fruition?